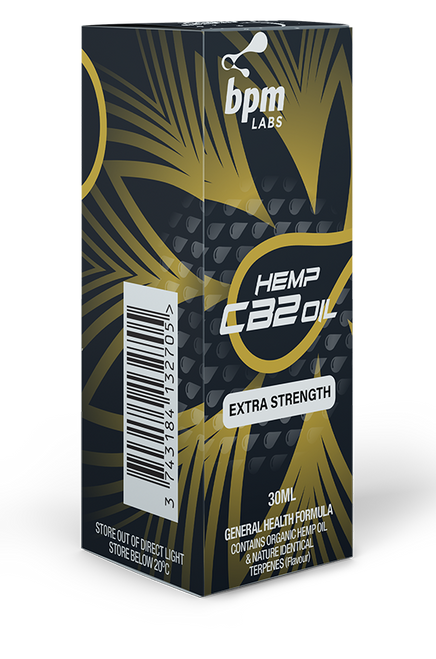 The HEMP CB2 Oil has just got supercharged with the EXTRA-STRENGTH of more terpenes added to the HEMP CB2 OIL that maximises the effects of the existing terpenes: Beta Caryophyllene and Myrcene.

Hemp Cb2 Oil Extra-strength is fortified with the power of more terpenes! These 5 new terpenes have been recruited to super charge the formula. The synergistic formula has been specifically designed to maximize the effects of beta caryophyllene and myrcene.

More is not necessarily always better. However, bolstering the elicited effects of the existing beta caryophyllene and myrcene with a unique support network of terpenes, can help to maximise the potential of these original terpenes found in HEMP CB2 OIL, while providing some new additional benefits.

*Hemp CB2 Oil Extra-Strength is a rich source of omega 3 and 6 fatty acids, vitamins A and vitamin E. Terpenes are added to the specified levels.

Omega fatty acids assist with general health including skin,  immune function and inflammation. Terpenes have a range of therapeutic benefits including improving the symptoms of delayed onset muscle soreness and recovery.

Serving size: 1ml daily as a liquid or blended into powders.

This product is only intended for healthy adults, 15 years of age or older. Consult your medical practitioner before using any dietary supplement. Do not take this product if you have any medical condition and /or are taking any medication. Do not use if pregnant or nursing (breast feeding). This product is not a sole source of nutrition and should be consumed in conjunction with a nutritious diet with an appropriate physical training or exercise program. Discontinue use and consult your health care professional if you experience any adverse reaction to this product. Do not use if safety seal is broken or missing. Keep out of reach of children.

Caryophyllene more formally (−)-β-caryophyllene, is a natural bicyclic sesquiterpene that is a constituent of many essential oils, especially clove oil, the oil from the stems and flowers of Syzygium aromaticum (cloves), the essential oil of Cannabis sativa, rosemary and hops, and unrestricted cannabinoids. B-myrcene is naturally occurring in mango, allspice, basil, angelica, cardamom and blueberry. It has a woody, citrus, fruity and slight leafy minty distinction. While B-Caryophyllene has a sweet, woody, spicy and peppery scent, this compound is found in lavender, ylang-ylang, black pepper and cinnamon.

Myrcene, or β-myrcene, is an alkene natural hydrocarbon. It is more precisely classified as a monoterpene. Monoterpenes are dimers of isoprenoid precursors, and myrcene is a significant component of the essential oil of several plants, including bay, cannabis, and hops. It is a key intermediate in the production of several fragrances.

Humulene is found in hops, coriander, cloves, and basil and is used as an anti-inflammatory agent. It has also shown to levitate the effects of B-Caryophyllene when used synergistically.

Humulene’s other potential effects include:

Alpha and Beta Pinene are terpenes largely found in conifers including pine, and are often found together. They have both been found to elicit a swathe of beneficial effects, including antibiotic resistance modulation, anti-proliferative, anti-microbial, anti-oxidant, anti-inflammatory, pain-reducing, gastroprotective, anti-stress, cytoprotective, neuroprotective, and pancreas-protective effects

D Limonene is a terpene that conveys a citrus aroma not only found in cannabis but also in the rinds of citrus fruits such as lemon, grapefruit, tangerine, orange and lime. Widely used as a food flavour and fragrance additive it is Generally Recognised as Safe (GRAS) and considered to have low toxicity. plants produce limonene as a natural insecticide to ward off predators.